Who is advising Bill? Or has Bill just lost his mind along with the support of the mainstream media? Who told him to dress in some pajamas and speak on a rotary phone to his fans? I am lost.

[Ronald Reagan:]
“And they say if we’ll only avoid any direct confrontation with the enemy, he’ll forget his evil ways and learn to love us. All who oppose them are indicted as warmongers. They say we offer simple answers to complex problems. Well, perhaps there is a simple answer—not an easy answer—but simple”

[Verse 1]
I got that black on black skin tone
Actual-fact syndrome
That’s why I dropped the cruel on every verse you heard me sh*t on
Okay, it’s a Slumdog Opera
The tale of a king whose name wasn’t on the roster
My road to glory was Road To Perdition
And Act II: The Turn is just the memoirs with no omissions
We came a mighty long way from standing near the stove in the cold
The greatest story ever told
The realest n*ggas see the pain in my story boards
The true believers say [Walaki] I support the boy
My life feel like a highlight reel, this is lightning striking
Feel how the Zeitgeist feel
Get a slight chill

END_OF_DOCUMENT_TOKEN_TO_BE_REPLACED 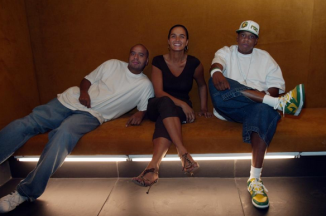 When asked by Sway on his relationship with Jay Z, Dame unloads on Jay Z’s close relationship with a Desiree Perez who is a known DEA informant and according to reports works closely with athletes in Roc Nation Sports. Perez is the wife of longtime business partner OG Juan, who is rarely seen and never does interviews.

Court records obtained by The News show Perez was part of a massive cocaine distribution case in 1994. Following her arrest, she became a key government cooperator, going undercover to help the DEA build successful cases against major traffickers in Puerto Rico and Colombia.

Cooperation with the feds won her supervised release, but she went on the lam and then served nine months in prison.

Perez was a 26-year-old mother of young children in 1994 when she was arrested in New York for possession with intent to distribute 35 kilograms of cocaine, according to court records reviewed by The News.

Federal authorities charged she was part of a drug conspiracy stretching from New York to Florida to Puerto Rico.

She and co-defendant Amaury Lopez faced at least 10 years in prison (Lopez was supposedly one of at least three men to marry Perez since the late 1980s).

END_OF_DOCUMENT_TOKEN_TO_BE_REPLACED

I gotta have it. So Cam is gonna really push this Mariah thing years after the fact?

Wonder if Trinidad James gets anything for his phrase “Don’t Believe Me Just Watch” currently anchoring the #1 song in the country “Uptown Funk” from Mark Ronson and Bruno Mars? He at least deserves a shout out.

In episode eight of Noisey Atlanta, we examine just how quickly the ups and downs can happen in the trap world. In short, the scene moves fast. To start things off, we meet Bankroll Fresh at a barbershop and talk about the rise of his late summer 2014 hit “Hot Boy.” Then we find ourselves in the studio with the elusive Young Thug before linking with Rich Homie Quan, who tells stories of getting out of jail and eventually forming Rich Gang with Birdman and Thugger (fun fact: RHQ and Young Thug apparently went to middle school together). Later, we catch up with Trinidad Jame$ over a year after the explosion of “All Gold Everything,” showing what can possibly happen to a hyped up rapper after the machine spits ‘em out.

High time to bring this back to the blog. Here we have the gorgeous Qadirah aka Bellaagunz who you may have seen in Fab’s “Lituation” video. Hit the jump to see more of this chocolate beauty who definitely is deserving of being the first to reintroduce our most popular segment of the blog. Spotted at Boxden.